With the team moving through it’s second year in existence, developing & improving with every race we are proud to announce our 2016 An Post Ras Team.

Daire currently sits 2nd in the Cycling Ireland rankngs and 2nd in the National Elite Road Series. He’s is 19 years and won’t be 20 until December which puts him as one of the youngest riders in the Ras. He’s has a host of placing’s and 2nd’s this year and he’ll be looking to claim a big result and break his “duck” in the Ras

David Brody is also a young rider just turning 20 in January and has only been rider the bike for 2.5 years. David is currently sitting top 30 in the Cycling Ireland rider rankings and 4th overall in the National Elite Road Series. David won the first race of the year in great style  is hoping for some good results during the week.

Derek has been on the road a few years and had been quietly preparing for the 2016 Ras with the assistance of The Athlete Clinic. Derek who works full time and has a wife and kids to mind is one of the Irish domestic riders who get that chance every year to ride against the pro’s in the Ras and again this year will do so hoping to have his highest placing yet.

Colm is a National Elite Time Trial Champion in the past and has been in the Cycling Ireland elite rider rankings for a number of year. Returning after missing last years Ras through injury & sickness Colm will no doubt part his knowledge and experience on the younger riders and give it a go on a few stages that suit his TT’ing prowess. 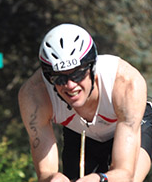 Liam comes from the triathlon world and was a National Irish Ironman record holder for a number of years and a valued member of the National Team. Liam switched to road racing a number of years ago and has been steadily improving year on year and will be improving as the week progresses where his big diesel engine will come into play.

The riders will join 160+ other riders and teams from around the world. They will tackle the 8 Day UCI 2.2 ranks International An Post bike race starting from Dublin Castle on the 22nd May 2016 and travel in and anti clockwise route around the southern half of the country. 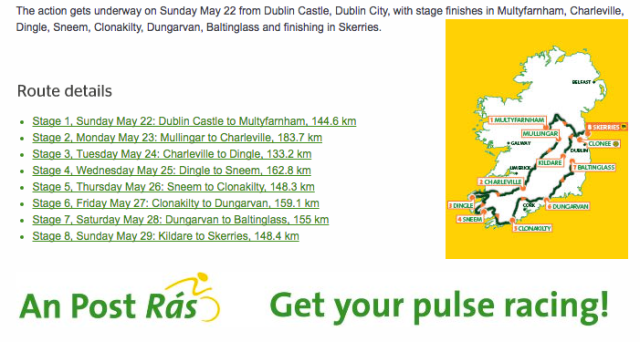 The Team will be supported by Jonathan Gibson as Team Manager, Noel Feeley as Team Mechanic and Christine O’Connor as Soigneur & Chef. All of the team support staff have valued experience from supporting riders at World Championships & European Championships level and the whole TEam are looking for some good results over the 8 days.

Support us in our journey either through sponsorship or on social media. All links to our social media platform etc are on the right of the page and we’ll be bringing you live tweets and video from inside the team car and race bubble during the week so stay tuned.

See ye on the road Guys.