Posted on October 8, 2014 by The Athlete Clinic

The Irish Talented Athlete Program otherwise know as iTap is a vehicle used to run and promote a cycling scholarship program in Ireland for young cyclists who wish to become full-time professional athletes. iTap will run and manage a Cycling Team for these athlete through 2015, 16 & 17. The team, its support vehicles, social media platform and daily exposure through team clothing and on the road travel provides an excellent advertising and promotional platform for any business. The service to the athletes is provided free of charge with the assistance of our partners and sponsors.

The project was founded and is currently managed by Jonathan Gibson. Mr Gibson has managed and developed athletes to European & World Championship standard in various sports. His drive and goal is to develop iTap in conjunction with its parnters & sponsors into a world class development program. Our platform generates in excess of 200,000+ hits per month and would be a cost effective addition to any business.

Year in and year out Irish sports loose so many athlete’s on the bridge between the domestic and the professional full-time competition circuit. The program provides the  tools needed by the athlete and assists them in crossing that bridge.

We would like to encourage you to use our partners and sponsors to support this program. A full list is available HERE.  Should you be interested in sponsoring or partnering with the project please do hesitate to contact us HERE.

Our site is free to navigate and comment on. If you are interested in being involved and assisting us in our journey with these young athletes please contact us HERE.

It’s been one of those season starts for the Team in 2017. Last year we got off to the perfect start winning one of the first races of the year, The Trader’s Cup, with David Brody. This year we have had four crashes, five infections, two broken bikes, two bouts of tonsillitis etc etc etc…..all part of the sport and running a team. The great news is that these challenges forces us to learn and from that equip the team with even more experience and knowledge to pass on to the current and future riders. We love turning negative into positive here a iTap.

In the images below we can see David Brody getting patched up after his spill in Limerick. While in a good group that looked like it was going away for the day David ended up upside down trying to do a third clavicle. Fortunately for him they both still have the scaffolding fitted so no success there. In the other image Daire Feeley riding for UC Monaco is just about to regain contact with the head of the race. We later found out he took a wrong turn and rode straight into a Hen Party. Looking at his presentation it seems he was luck to get out alive. 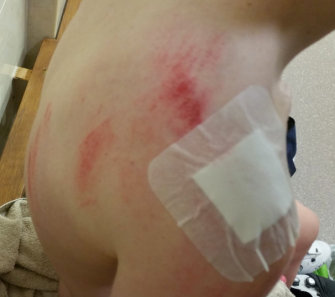 For 2017 Team iTap have been very luck to secure new partners and sponsors in the form of Primal Europe, Doormotion, Skoda/Monaghans Galway and retain The Athlete Clinic, Power 2 Max.

Unfortunately the weather since the start of the season has been pretty poor and hasn’t afforded us the chance to fill the camera roll but we will be improving on that over the next month. Good weather is promised this weekend for our journey to Kilmessan GP in Meath so if any of our supporters have some good pictures of our riders we might just have a little competition to see who has the best images for us.

Our Primal Europe kit has been outstanding since the start of the season. Below is Jason Prendergast and David Brody prior to the Des Hanlon Memorial Road Race which forms part of the National League Series. Also included is the the 2 lads again finishing the Newbridge GP. It is great to see how the kit washed out between events and retains it ‘s vibrancy.  The stitching, shammy, fit & quality on our Helix 2.0 Bibs, Shorts & Heavyweight, Race Cut, Long Sleeve Raglan kit is second to none and the riders are loving it. Guess the rider who is number pinning. You need to send this name with the photo’s. 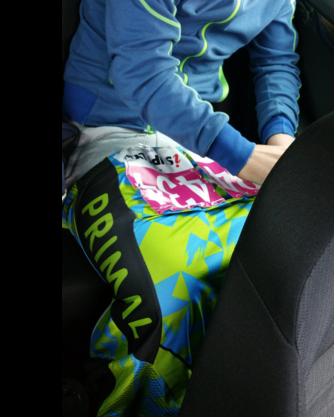 In 2016 we laid our old Team Car to rest. She had more lights lit on the dash board than a christmas tree by the end of the season. We were very much in the market for a new reliable mode of transport for 2017. Every year the Team travels to the UK, Europe and throughout Ireland and with this in mind the transport needed to be quality. This is where Skoda/Monaghans Galway stepped up to the plate. We had discussions with a number of manufacturers throughout September, October  November in order to try get the best deal for the team. Adrian Quinn of Skoda/Monaghans Galway was the man that understand the needs and demands of an U23 Cycling Development Program like iTap. The team received delivery of it’s new Octavia 2.0tdi 150bhp Combi at the end of January without fail and in perfect time for the seasons start. Picture is Adrian Quinn Skoda Brand Manager of Monaghans Galway and Jonathan Gibson Team iTap Director. 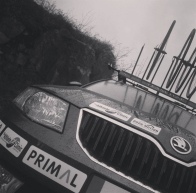 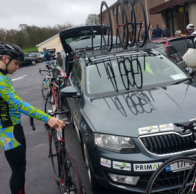 Another big asset to the Team this season has been the involvement of Doormotion. Doormotion provides financial support to the team. This support allows the team to travel into the UK and Europe for international racing. The exposure to a higher calibre of competition is imperative for the riders development. Costs such as accommodation, boat fares and the ancillaries that go with this are in excess of €3500 per trip for the team. Without Doormotions involvement the cost would have to be born by the riders. When you have young riders who are fulltime riding their bikes and not in fulltime employment the costs can rise very quickly. This puts big demands on families especially in the case of riders from single parent families. Doormotion’s contribution to the team in assisting these young riders is a corner stone.

The Athlete Clinic has been instrumental in the development and setup of Team iTap. All of the teams rider receive continued support either on a daily or weekly basis as required. Regardless of injury, sickness, peak form success or failure The Athlete Clinic is on hand to the riders with guidance and advice on how to recover and improve. Their full suit of Coaching & Athlete Services is one of the foundations to the iTap success story to date. 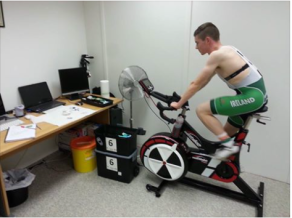 Daire Feeley Undergoing some testing at The Athlete Clinic

We would also like to inform all of our supporters that Team iTap will launch the 2017 Team in Skoda/Monaghans Galway Tuam on Thursday 20th April. So put that date in your diary. We will announce at launch time closer to the date.

Thanks for reading, get those images in by tagging us on social media or using #TeamiTap and we will see ye all on the road.

From our humble beginnings in 2014 to getting Daire Feeley signed for UC Monaco our program and riders have gone from strength to strength. This latest news is an indication that if a rider has the ambition and motivation to make a career and way of life out of being a professional bike rider then Team iTap is the home to do that. Daire has moved onto the next step to that goal.

The selection of UC Monaco for Daire’s further development was quit a simple one. Let us first explain that the program Daire will be riding for in 2017 is an U23 specific team sponsored and run by the Cycling Federation of Monaco, hence our meeting with the President and Technical Director. During 2017 Daire will be exposed to UCI level races across Italy, France, Spain, Belgium & Ireland. 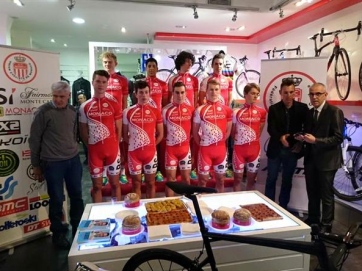 Daire will also be living in an environment solely dedicated to cycling with some of the worlds best athlete’s living and training on his door step. He will train on the same roads as the like’s of Sagan, Froome, Porte, Nibali. He will also have some Irish lads local to him in the shape of Bennet, Roche and the Aqua Blue Pro Continental guys. Daire team mates will represent 8 different nations broadening his knowledge and appreciations. Another big bonus for Team iTap and Daire is that Team iTap will still be heavily involved with Daire’s development moving forward with testing, coaching, athlete services & performance improvements. All of this will be executed in conjunction with their technical director Guido Possetto and the UC Monaco structure. On traveling to meet the UC Monaco outfit one thing became apparent from the weekends visit. UC Monaco and Team iTap have but one focus and that is the development of the rider and giving back to the sport. A clear vision that isn’t about directors, coaches, mammies or daddies but about the rider and providing the utmost duty of care in order for progress and success. An honest and transparent structure only develops success and this is an extension of the iTap vision. 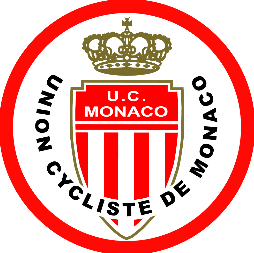 UC Monaco will provide Daire with a stable accommodated base in Monaco from where he can training and progress. The team will provide accommodation, equipment, nutrition both on and off the bike, all of the travel, team services, support and accommodation to and from UCI events, training camps access to some of the top riders in the world who hold Monégasque licenses. For Daire all of this is a valuable chalice of knowledge and an extension of our work at iTap.

Moving forward Team iTap are developing with partners across europe and our current relationship with UC Monaco can only but see Daire Feeley realise his dream of becoming a professional bike rider and most importantly a World Champion. We are looking forward to working with UC Monaco and developing a vision and dream both parties share.

Doormotion partner with iTap for 2017

Posted on October 7, 2016 by The Athlete Clinic

With Team iTap going from strength to strength in it’s development of young riders we can now reveal a new partner to assist us in our journey. We are proud to announce our partnership with Doormotion for the 2017 season and beyond.

Doormotion was founded  in 2011 by business partners Jimmy Wynne and Paddy Murray. They are extremely passionate about the work they do and with a combined experience of over 50 years industry experience, Their dedicated team of specialist engineers, technicians and operatives offer a comprehensive engineering solution, from supply and installation to servicing and repairs. Doormotion   is a leading provider of loading bay equipment, industrial and bespoke specialty door systems and is not tied to any single supplier, meaning they can offer tailored engineering solutions to suit each customer’s individual needs, giving their clients substantial design flexibility. All products and services at Doormotion, including their 24/7 call-out service, are fully compliant with the highest industry and legal standards.

With Team iTap’s race program set expand for the 2017 season Doormotion will provide iTap with financial support to compete in these international events and give the young riders that experience lacking in the domestic racing scene. This support is following on from our partnership with Primal Europe who will be providing all the team clothing for 2017. We will be announcing more news over the coming months and are looking forward to developing our partnership with Doormotion.